Shooting for the Gold 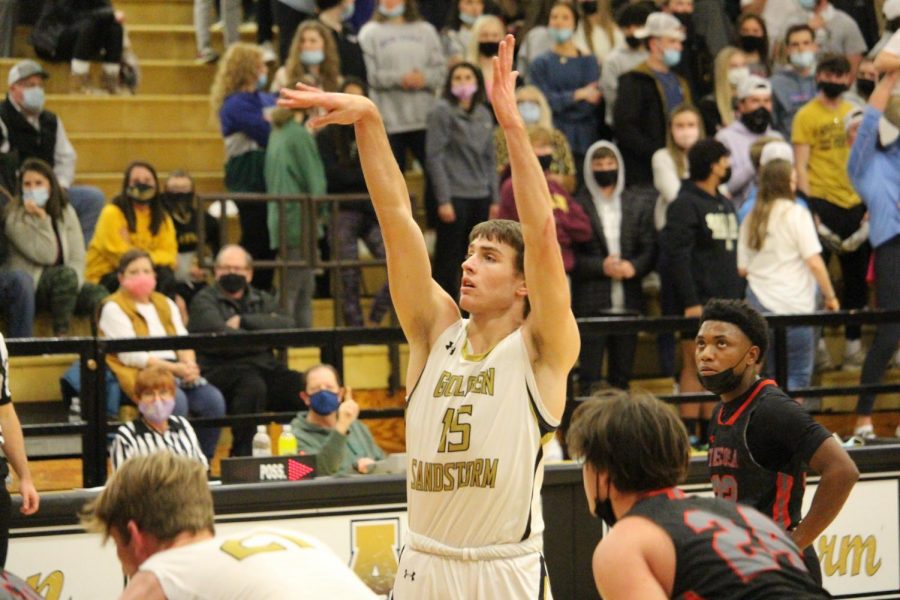 Hausen shoots a basket during the Tascosa Game

Brendan Hausen wakes up today as a 4-star basketball recruit with 13 Division I offers – including Texas Tech, OU, Houston, and Ole Miss – ranked the number 11 in all of Texas, and the all-time leading scorer in Amarillo High boys basketball history.

Pretty good resumé for someone who is 17 years old and only a junior in high school.

As Amarillo High digs in for  a  hopefully a long playoff run, one must look at why Brendan has become the rare Amarillo ISD D-1 prospect.

His love for the game of basketball started at such a young age, even his first steps included doing a Euro-step straight to a Little Tikes Basketball. Brendan has always put his family first. He describes his father and Amarillo High assistant basketball coach, Benji Hausen, as a dad first, a coach second, and a best friend third. Their tight bond guided Brendan into the man he has become.

“My dad is always honest with me whether it is basketball or life,” Brendan Hausen said.

His mother, Stefanie Hausen, is also known as his biggest supporter as she never misses a game. Brendan says she has taught him so much about life.

“My mom holds down the house for sure,” Brendan said, his mom holding some serious basketball accolades of her own including two state championships at Amarillo High in the 90’s and played at the University of Texas.

Brendan has two younger siblings, his brother, Braden, and his sister, Bennett. Braden, a freshman at Amarillo High, pesters Brendan day-in and day-out and the competitiveness between them fuels both of their work ethics. Brendan strives to be a mentor for Braden as they both know they have each other’s back through the thick and thin.

“There is not a day that goes by that we don’t make each other laugh,” Brendan said.

Braden on the other hand had his own opinion on the humor in the Hausen family.

“We could be together for hours and you couldn’t guess how many times we laughed,” Braden said. “But all in all, I most definitely carry the humor in our family.”

Lastly, but certainly not least, his little sister Bennett is “the sweetest person I know.”  Even though she is in 5th grade, Bennett never misses a game and loves to be around Brendan whenever she can. Bennett keeps Brendan motivated as a leader and his goal is to set great examples in her life. While Brendan considers each of his family members a role model of some sort, his trainer, Tez Dumars, is a person that Brendan looks up to. Dumars played in two Texas 5A State Championship games while he attended Garland Lakeview Centennial High School. Locals may know the name Tez Dumars as he was a four-year starter at West Texas A&M from 2011-2015. Brendan might be the older brother to two younger siblings, but Tez Dumars has become his older brother pushing Brendan to his ultimate goal of making it to the NBA.

“I got a chance to play at the professional level,” Dumars said. “I know that is Brendan’s dream, that’s what he wants to do. I will be there for every step of his journey and I will always have his back.”

To even have the thought of being an NBA prospect, Brendan created a superhuman routine getting him ready for making his dream come true. Brendan’s daily training routine consists of waking up at 5:45 A.M. and heading to Verdure’s gym. Once he arrives, Brendan knocks down 250 shots and occasionally gets a lift in depending on what the day entails. Once his gym session is over, Brendan goes home and gets his school work done as he attends Amarillo High virtually.  Virtual school has been a blessing in disguise for Brendan.

“It’s helped me tremendously because now it’s at my own pace,” Brendan said. “As busy as my schedule can get, the ability to have flexibility is relaxing.”

Once his school work is finished, Hausen heads to Amarillo High where he proceeds to make 500 more shots before his 3:15 P.M. team practice. After a two-hour practice, Brendan heads home for a nice family meal, but the minute dinner concludes, he will head right back up to Verdure to get even more shots up. 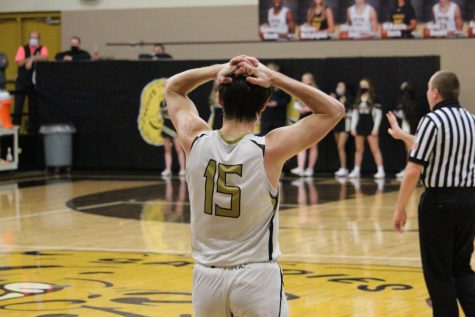 Think about this for a moment, that’s 800 shots made a day. That’s 4,800 made shots a week. That’s 19,200 made shots in a typical month. Brendan repeats this routine day-in and day-out. Truly living the “first one there and last one to leave” mentality that so many players strive for but few accomplish. Brendan’s remarkable dedication to his craft comes from hunger to be the very best.

“The best I have ever seen,” Amarillo High Head Coach, Jason Pillion said. “Most people, regardless of the walk of life, do about as much as they need to do.  Those who are considered hard workers work hard in areas they enjoy.  Brendan is in a class by himself.  He works hard at basketball, harder than any kid I have had.  He loves the game and when you love something it’s easy to put in the extra effort.  But what separates him is how hard he works at things no one likes to do, like the weight room, stretching, getting rest, eating right. He does the boring little things that most people ignore that ultimately make the difference.”

With all those goals and aspirations, Brendan lives in the moment and enjoys every second with his high school teammates and coaches as those memories last a lifetime.

Earlier this year, Brendan made a team memory when the Sandies drove six hours to face the No. 1-ranked team in Texas, Lancaster Tigers. While the Sandies would go on to lose a heartbreaker 60-59, Brendan said that game proved Amarillo High belongs in the conversation as the top teams in Texas.

“It showed how tough we were to get on a six hour bus drive and compete against some of the top talent in Texas and then have to go home the same day,” Brendan, who passed Michael Dawn on Jan. 12 for all-time leading scorer in Sandie history, said. “No one was doing what we’re doing and it just shows how different we are.”

Brendan’s relationship with his teammates truly shows that the bond between them is unmatched.

“It is a brotherhood for sure, a different bond than any other team I have ever been a part of,” Brendan said. “It goes along with how great the culture has been over the years Coach Pillion has built. We play for each other and I have grown up with these guys since I was little and it’s been nothing short of special!”

Before all the training sessions, all the 5:45 A.M. wake up calls, all the countless shots put in the gym, Brendan lived his childhood like you and I. A young Brendan would be out fishing with his friends, riding scooters, and obviously having some one-on-one battles with anyone who wanted the work. Brendan’s mindset changed from normal kid to obsessed gym rat when he fell in love with the game.

“I was just having so much fun with basketball that I never wanted to be anywhere else but the gym,” Brendan said. 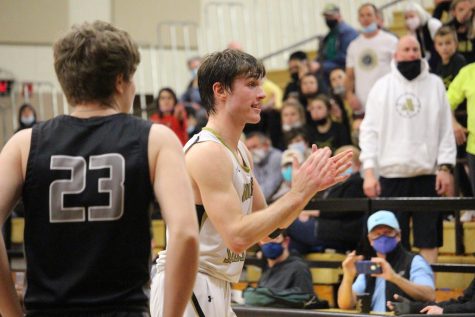 And like most hoopers, Brendan is an avid basketball watcher. He may not have a favorite college basketball team, but he enjoys the overall atmosphere that the sport brings, hoping for the nail biter that ends in a game-winner.

Hopefully one night, Amarillo locals tune in on TNT and see Brendan Hausen cashing in a game-winning shot. He would become the first player from Amarillo High to make a shot in the NBA.